I promised someone this on Twitter, then took so long getting round to transcribing it that the person’s kind offer of a place to post it lapsed.

I’m therefore posting it here as otherwise all that typing practice will go to waste.  It’s my own peculiar verbatim style of transcription, which I trust will be excused. Only the [square brackets] are my editorial comments – the others are his.  The late AEW-S had a very plummy voice (a bit like Peter Sellers) so it helps complete the experience if you bear that in mind while reading.

..Let’s go to the last point… in this august city where I was born (and I haven’t been back for 35 years) there was a debate in 1860 between Soapy Sam (Wilberforce) and …TH Huxley.  Huxley listened to Paley’s natural theology from Soapy Sam, got very very short with the poor old man, he says “Look we don’t want to say that because there’s a creation, there is a creator.  Let’s forget that, because I’m going to prove to you that can forget it”.  So Soapy Sam said “Do so”.  And he did it like this (TH Huxley).  And I’m going to use the same example to show the flaw in his thinking, as far as I can, and leave it to you to decide what you want to do with it.  He said “let’s take the 6 eternal typewriters” which you know all about – you’ve all read TH Huxley, haven’t you on this?  6 eternal typewriters, we’ll put 6 eternal apes on them who’ll never die, and we’ll let them strum on these things and they’ve got endless amounts of paper and endless amounts of ribbon, and endless amounts of ball-bearings so they never go to pieces.  OK?

Now he said at the end of eternity, or when eternity’s almost by (and I have great difficulties about that one, but that’s what he said). He said “when I look at the nonsense that they typed throughout all eternity, I find in the papers that they wrote, the 23rd Psalm.  ’The Lord is my shepherd, I shall not want’”.  Now Wilberforce got very annoyed about that, he said “It’s impossible”.

So Huxley said to him, “Look you’re a professor of mathematics, aren’t you?” So he said “Yes”.  Well he said don’t you know that the probability formula says that where T is infinite, and the amount of matter is infinite, the probability is 1.  That is, you will certainly get all events to take place if you have time and matter enough.  Now the earth is very old, we’ve got lots of time and lots of matter in the universe, therefore the probability is 1 that you, Bishop Wilberforce, are like the 23rd Psalm – you were formed without an author.  Because the 23rd Psalm was formed by strumming, you see, without David as the author.  Now as David’s Psalm was produced without David, said TH Huxley, so you according to probability law could be produced without a creator.

Now that argument is still recognised as valid today.  There was an article in The German [Scientist?] quite recently about it – it said anybody who didn’t know [..indistinct..] was ignorant.

Let’s take the flaw in the argument now.  May I ask you to look at this ever so carefully.  It is very difficult to see.  It took 40 degrees of frost in Chicago when I was crossing a pedestrian crossing when it suddenly flashed on me where the flaw in the argument was.  I got out of a train at 30 degrees centigrade and it was 40 degrees below outside and it suddenly dawned on me what had gone wrong.

Take not 6 eternal typewriters like Huxley had, you take one of those [indistinct] typewriters.  These are special typewriters which have a special lever in them.  When the lever is pushed to the left, they type like an ordinary typewriter.  That is when ‘A’ comes into my mind, or into the ape’s mind, he presses the key A, and A goes through the machine, onto the paper.  And there it stays.  When B comes into my mind, B goes down my arm, through the machine, onto the paper and it stays on the paper.

That’s how he got his Psalm, you see, by machines like that.

Now if you had apes on a reversible typewriter like that, how long would it take to type the 23rd psalm on such machines?  Well obviously, if everything went back where it came from, they could type until kingdom come (for the theologians) and you’d never get anything out.

If that’s the case, remember this, that all the reactions on which the body works (chemically) are reversible, because they’re enzymatic reactions, and the enzymes only catalyse reversible reactions.  They are reversible typewriters.

Now you can’t do any synthesis unless you can do as [unclear] says – you’ve got to put any reaction to get structurisation [unclear] far away from equilibrium in order to do it.  Now information – surprise effects – in the genetic code, does it.  But to derive structurisation, evolutive speciation and biogenesis from natural law is just not science today.  You can’t do it.  You can only derive if you add to natural law, matter plus information, and if you think information comes from stochastic chemistry, then I’m afraid you’re beyond medical aid. 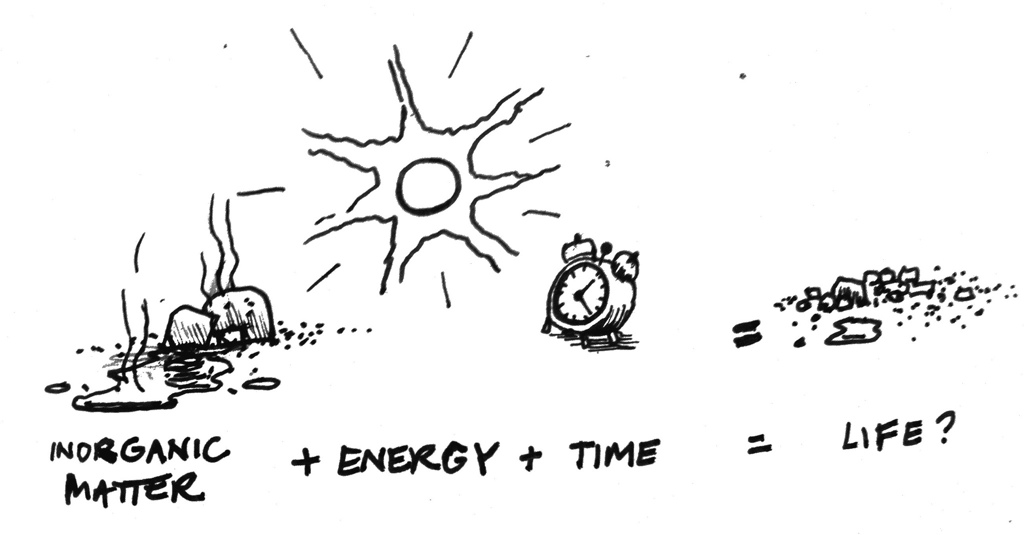 The old problem which Dawkins and Hawking and especially Crick can’t answer – reduced to a simple formula by the late AE Wilder-Smith in a debate decades ago at the Oxford Union.

It renders alternatives to creation rather less scientific than they are made out to be, and shows how adding one element, a surprise effect not derived from matter or the laws of nature, completes the equation.

The creationist scientist suggests that the more honest and evidence based equation would be:

Can’t get over the way my baby son has formed, was born and is growing, and am not yet so boorish as to think he’s just an accident of molecular structure. God designed him – any creative people can surely recognise the hand of an artist and give that artist the glory he deserves?

This website page carries more information than usual – it was not an accident, nor was it created by one!

Have a great day.