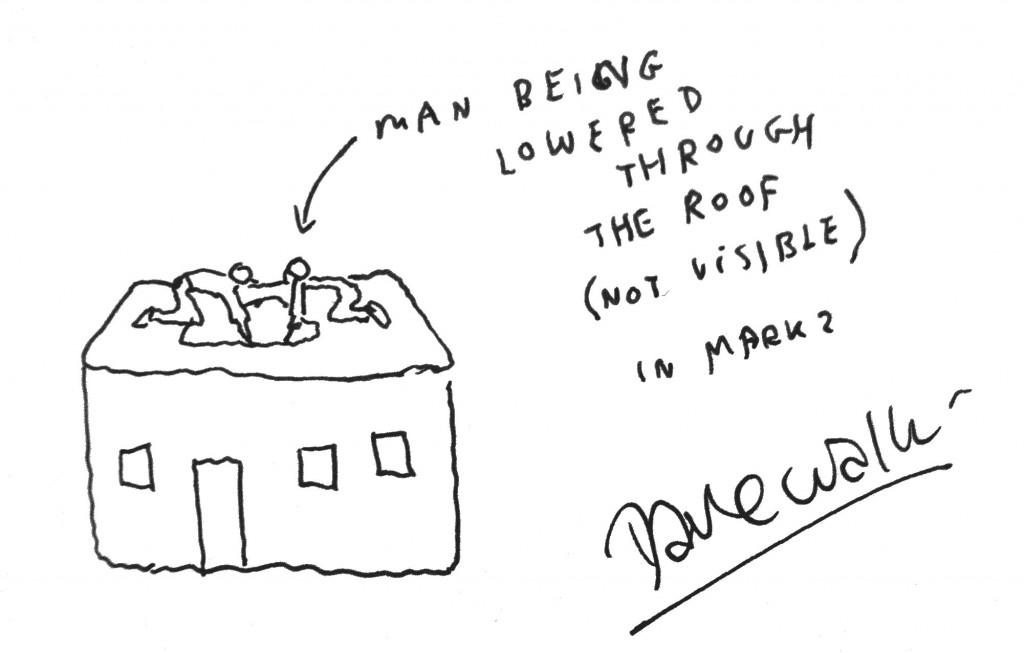 I’m pretty sure that in nearly 40 years this is the first time I’ve got anyone to sign something.  Oh no – hang on, there was Roger Black (or Steve Backley?) at a work motivational thing, but I’m … er … not sure why.

This is different – not only a signature but a sketch by the great Dave Walker in my sketchbook.  Mr Walker’s cartoons are widely appreciated among our dear Anglican brethren, many of whom had been meeting round the corner for a chinwag at the Synod. They can be found here and in the Church Times, are served up regularly on Twitter (@davewalker), and humans being the same everywhere, create amusement across Christendom, and to me.

A blank page being uninspiring, I asked for an illustration of the man in the Bible whose friends were so keen that he should meet Jesus that they dismantled someone’s roof.

It’s something I’d been thinking about today anyway – partly as I’d seen the Archbishop of York’s speech on the importance of spreading the good news about Jesus Christ – in terms of priorities everything else being like arranging the furniture while the house is on fire.  No idea what happened after that, but well done him.

Back to the sketch – To put it briefly, a paralysed man was brought to Jesus, his mates couldn’t get him through the crowd, so they knocked a hole in the roof and let him down with ropes.  They were not messing around.  The full story is in Mark 2:1-12, and contains the gospel essentials of faith in Christ and forgiveness for sins.

The odd thing was Jesus’ response.  Was it:

a) Do you want me to heal you?
b) There’s a great physician in the next town
c) The people in the Reformed synagogue are really nice and will look after you, or
d) The police have been called and you will be held responsible for this damage?

In a well-remarked shocker, Jesus looked at the faith that had been shown in him and said “Son, your sins are forgiven.”  Sharp intake of breath all round.  Jesus is being more than the parochial healer we can just about cope with.

Mark doesn’t record the man’s response, but even he might have been forgiven for questioning Jesus’ priorities.  “Um – I rather thought my problem was the paralysis thing..  no?”

No.  It’s been said before, but Jesus came to save people from their sins.  That’s the big problem.  Bigger than banking, poverty, illness, war or politics, although it touches on all of those things.  What I like about this story is that the healing is there as well, and it’s there so the people know that Jesus is God, and that it’s through him that we can have forgiveness of sins. The man walks away with everything – for free.  Christ bore those sins to the cross.

At the risk of being too froward in this post, the Christianity Explored course is not a bad idea.  Time I shut up – hope Mr Walker doesn’t mind the use made of his sketch.